skip to main | skip to sidebar

Threshold is thrilled to announce that its production Three Little Dumplings Go Bananas will debut at The Bay One-Acts Festival on April 22, 2012. Learn more at: www.bayoneacts.org.
Posted by jessica at 12:45 AM No comments:

In the Threshold This Summer!

Threshold is very excited to announce two new development projects in the works with Ben Fisher and Megan Cohen. Threshold is spending the summer thinking about information technology, governmental transparency, power, Martin McDonough, Pinter, domestic fables, absurdism, Durang, Churchill, female-centered narratives, dumplings and much much more! Look for these fantastic new plays to find their way to the stage in Spring and Summer 2012! 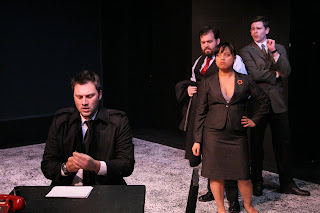 The Huffington Post loved the play. You can read more about what cultural arts writer George Heymont had to say about it HERE 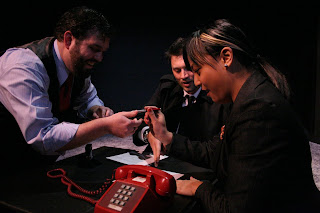 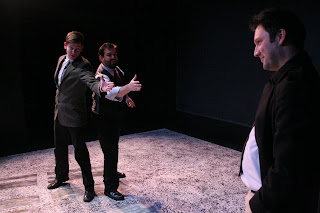 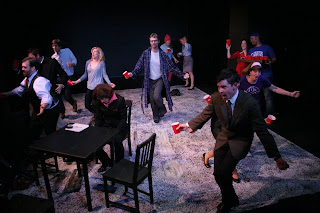 It's all out "cele-fuckin-bration" at the end of the play. All cast members PLUS all of the cast members of BOA X rush the audience!

We are very excited to announce that Threshold will take part of the Bay One Acts Festival for the third time! We are thrilled to be part of BOA's 10th anniversary year.

BOA X opens March 6 at the Boxcar Theatre in San Francisco. Complete program and ticket information can be found at www.bayoneacts.org.

See you at the theater!
Posted by jessica at 12:11 AM No comments:

TERRORiSTKA burns brightly to the end 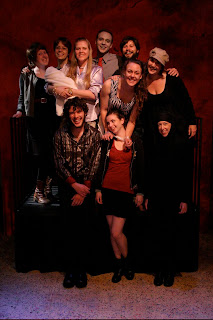 It's been a little more than 2 weeks since Terroristka closed and the Thresholders are still feeling the glow. What an incredible process, a beautiful production, and a memorable journey.
Thank you to all who made our first full-length production possible. We could not have done it with out you.
Threshold is so happy to say that we played to capacity houses throughout the run and that we covered all of our costs and paid all of our artists. More than that, we grew our community -- both artists and audience.
The Thresholders are also very excited about the next steps for Threshold. We have a number of announcements about our upcoming projects that we will make shortly.
Until then...still enjoying the afterglow.
Photo by Clay Robeson. Picture above from clockwise from left to right: Addie Ulrey, Alison Ostendorf, Molly Holcomb, Andy Strong, Geof Libby, Kate Jopson, Jessica Holt, Adrienne Krug, Sarah Rose Butler, and Alex Curtis
Posted by jessica at 8:47 AM No comments:

Threshold is super duper stoked about the new production photos taken by Clay Robseon of TERRORiSTKA which just closed yesterday to a sold-out house, a standing ovation and a shower of rose petals.
To see the full album, click on
http://www.facebook.com/album.php?aid=183691&id=266343120736&ref=mf 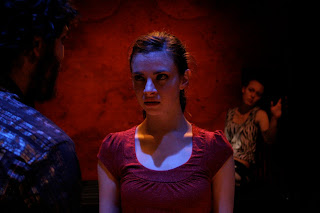 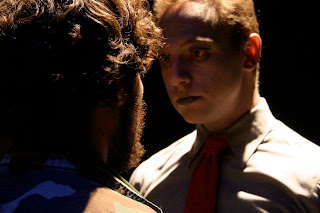 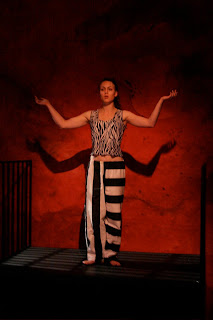 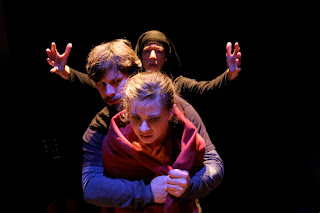 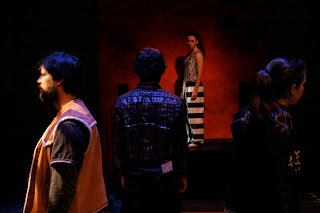 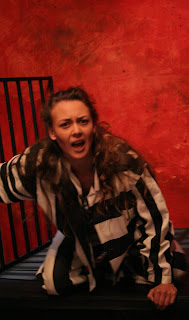 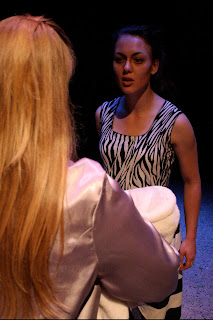 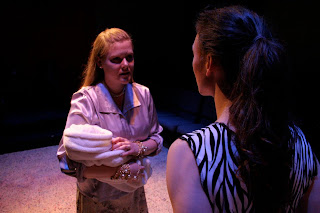 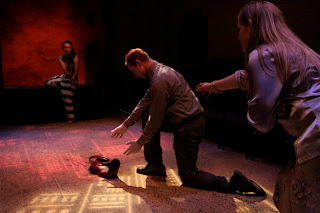 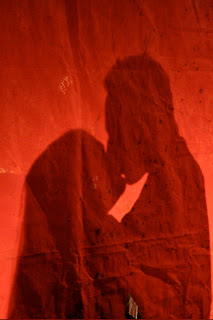 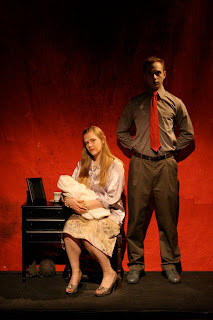 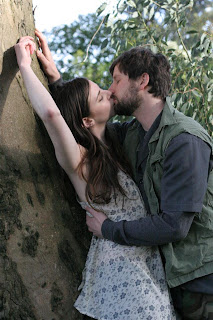 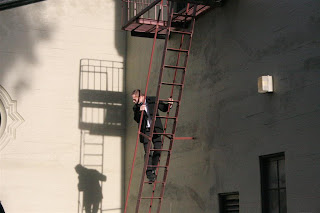 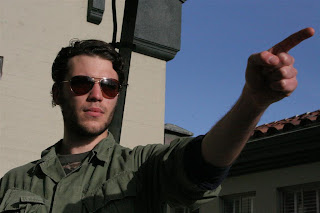 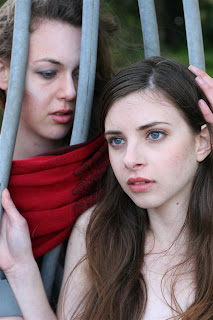 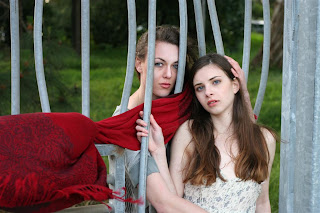 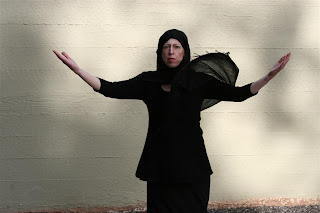 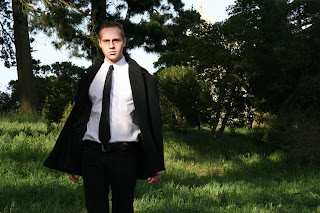 For more photos: CLICK HERE
All photos by Clay Robeson.
If you use these photos anywhere, please credit photography.ClayRobeson.net.

No reprinting without written permission.
Posted by jessica at 3:35 PM No comments:

The clock is ticking. It is just a matter of weeks until Threshold’s World Premiere of the heartbreaking poetic docudrama TERRORiSTKA by Rebecca Bella, directed by Jessica Holt, ignites the stage.

TERRORiSTKA marks Threshold’s inaugural production as a fully self-producing theatre company. After producing seven critically-embraced and audience-adored plays at festivals over the last two years, Threshold is thrilled to make its solo debut at the Berkeley City Cub, April 30th – May 16th, 2010.

TERRORiSTKA tells the true story of a young Chechen woman who attempts to flee her war-ravaged country by joining a rebel faction that trains her as a suicide bomber. As the play tracks this woman’s journey from the Caucasus mountains to the crowded streets of Moscow, it contemplates her passage from innocence to menace and finally to an understanding of her own tragedy. On a broader scale, it examines how young people can become entangled in violence and enable the conflicts that destroy their lives. This expressionist drama is an important examination of the psychology of suicide bombers, as well as a serious meditation on women’s involvement in war.

TERRORiSTKA began five years ago when Rebecca Bella was on a Fulbright Scholarship in St. Petersburg, Russia. While there, Rebecca discovered the story of 22 year-old Zarema Muzhakhoyeva who was captured by Russian police after she refused to carry out her suicide mission and walked away from a bomb in front of a crowded café. Because the bomb she had abandoned killed an FSB operative assigned to disarm it, Zarema was tried as a criminal in Russian court. And a very rare narrative was revealed: the testimony of a suicide bomber. Rebecca was drawn to Zarema’s story and a play was born.

Three years later, the play found SF-based theatre director Jessica Holt, and her company Threshold. With Jessica at the helm, Threshold welcomed the project of further developing TERRORiSTKA for the stage.

Founded by Jessica Holt, Alex Curtis and Pamela Davis, Threshold: theatre on the verge is a dynamic new company emerging on the Bay Area scene. Grown out of a UC Berkeley directors’ workshop, Threshold is dedicated to creating bold, beautiful theater. Threshold challenges artists and audiences to imagine the edges of the possible in a process-based environment that embraces risk, growth and change. Our work is surprising and immediate and embraces the poetry of language and physical space.

Artistic Director Jessica Holt: “Threshold was founded on the shared belief that theatremaking is alive with risk, alive with language, metaphor, material bodies, and emotional expression. At its best, theatre creates a kind of alchemy of time and space, where imagination is encouraged to take flight. Rebecca Bella’s TERRORiSTKA perfectly complements our vision and mission. We are so proud to be the first company to produce Rebecca’s important play.”

DONATE TODAY.
To ensure we receive you donation, please write "Threshold" in the "Designation" field.
To donate by check or money order, please make your tax-deductible donations payable to our fixcal sponsor -- CounterPULSE -- and indicate that the funds are for us by writing "Threshold" in the memo line of your check.
Please mail to:
Jessica Holt
Artistic Director
Threshold
375 Grand Ave. #301
Oakland, CA 94610

THRESHOLD is a fiscally sponsored project by CounterPULSE

We challenge artists and audiences to imagine the edges of the possible in an environment of risk, growth and change.

Our work is surprising and immediate and embraces the poetry of language and physical space.

Welcome to Threshold:
theatre on the verge

email us at thresholders (at) gmail.com